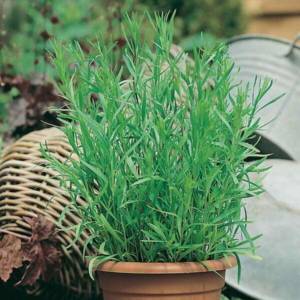 Russian Tarragon is a perennial herb that can reach stature heights between 100 and 150 cm (40 and 60 in). However, when it is cultivated in gardens or on the balcony, it is usually much smaller. The plant roots with up to 15 cm relatively flat (shallow-rooted plant). It forms quite small, mostly light brown to creamy white, root hairs.

The dark green leaves of Russian tarragon are quite narrow and tapered. They are usually between 2.5 and 3.5 cm (about 1 in) long for a fully grown plant. In general, the leaves of the Russian species are slightly longer than those of the French or German species.

Sowing should be done in the Spring or after frost A preculture in seed trays is recommended, but not mandatory. Russian Tarragon is a classic light germinator, so the seeds should only be pressed slightly into the substrate. The substrate should be nutrient-poor.

A single Russian Tarragon plant needs a lot of space. The distance between the plants should be at least 50 to 60 cm (20 to 24 in). On the balcony, the plants should be cultivated in wide pots. Incidentally, the young plants react very strongly to food competitors. It should therefore be paid close attention to weeds especially at the beginning.

Russian Tarragon is hardy and does not need to be replanted during the cold season. Although the plant is perennial, the plants should never be in the same location for more than four years.

The plant should never completely dry out and be moistened within the roots with water. Too much moisture and waterlogging should be avoided strongly, as this can quickly lead to the death of the plant.

Russian Tarragon needs little to medium nutrients and is well-balanced with most soils. Smaller amounts of compost or an organic fertilizer (cattle manure, fertilizer pellets) are recommended in spring. Potted cultures should be fertilized approximately every six to eight weeks, as a stronger nutrient leaching is to be expected here.

Harvesting Russian tarragon should always take place before flowering, otherwise the herb will lose noticeable aroma. Upon further use, the inflorescences can be cut off. The leaves are the most aromatic just before flowering. Even if tarragon is best used fresh, the popular spice herb can be stored frozen. The plucked leaves can also be dried, but here is to be expected in terms of quality losses in flavour. When harvesting, only the leaves, not the flowers or twigs should be harvested or used.

With good care and good site conditions, diseases and pests are rarely to be expected. However, it is not uncommon for aphids to attack the plant. For larger specimens, occasional collection or treatment with a biological agent will help. Hard chemical treatment should be avoided here. In addition, rust or mildew may infest the plant. This is usually the case when the tarragon has had to undergo prolonged periods of stress (such as dryness, predators).

Russian Tarragon and its use

Russian Tarragon is a popular culinary herb and the main ingredient in many dishes. Also, the herb is sometimes mentioned and recommended as a medicinal plant.

Russian Tarragon in the kitchen

Different types of tarragon are distinguished. The Russian tarragon, which is considered the basic form, is a bit weaker in taste than the French tarragon. This is because the Russian tarragon has significantly lower levels of essential oils and flavonoids, which make the typical taste of estragon. The German tarragon can be described as an intermediate form and lies both in the bitterness and the aroma between the other two varieties. Overall, the aroma can be described as sweet aromatic with a fine touch of anise.

The leaves go well with meat (especially lamb and poultry), egg and cheese and cream dishes. In some cookbooks, tarragon is always recommended to use pure, meaning without other herbs. Others recommend that herbs such as chervil or lovage make an interesting addition.

Russian Tarragon can be cooked with the food. The aroma is not affected when cooking, on the contrary, the taste is even more intense.

Russian Tarragon is one of the main ingredients of the Bearnaise sauce. This sauce is mainly made from egg yolk and butter and is especially refined with herbs such as chervil and tarragon. The sauce is mainly served with grilled meat or fish.

Another delicacy is estragon mustard, which is mostly made from Dijon mustard, some honey and vinegar. Such mustard goes well with grilled meat and vegetable dishes as well as with fish.