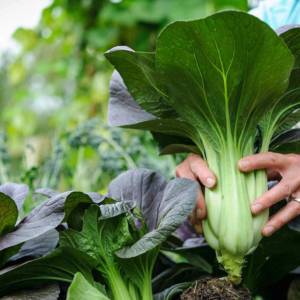 Pak-Choi Tonko green F1:This is a fast-maturing, versatile and tasty crop to grow in your vegetable patch or containers on your porch. Pak-Choi Tonko, like many other Asian vegetables are a cool season crop, preferring moist conditions and the ideal temperature range or 15 to 20 degrees Celsius, light frosts are tolerated by most varieties, generally the ideal time to plant is in the spring and autumn. Tonko Green F1 have a broad, flattish light green and smooth stems, wide at the base and generally harvested at around 15cm tall, generally used in salads but are also good in stir-fries.

Pak-choi is a vegetable that has been in cultivation for a long time in Asia, Possible thousands of years. Pak-choi is widely used in Chinese cuisine as well this vegetable is extremely popular in the rest of Asia as well. The is confusion with its name as many areas know this vegetable as Pak-choy, Bok-choy, Bok-choi, Pak-choi or Chinese cabbage to name a few. This may have come about as a misunderstanding as how the Chinese name for this vegetable is translated, regardless of what you know this vegetable as, this is and extremely versatile vegetable that is extremely flavoursome and tender which can be used in a wide assortment of dishes.
As this vegetable is sometimes known as Chinese Cabbage, this is reference to the fact that this vegetable is classified in the Brassica genus, along with cabbages, Cauliflower, Kale and Broccoli to name a few. Pak-choi also belongs to the Mustard family, so they have a distant tangy, somewhat spicy flavour as of that link. Pak-choi can come in a wide variety of sizes and colours thanks to the development of specific cultivars.
Classic Pak-choi has white crunchy stems and a dark green leaf, both as which are edible and delicious. In Asia, the smaller the vegetable is, the more favourable the vegetable is viewed, because the smaller plants tend to be more tender, while outside of China, people seek out the larger plants as they are under the impression that the larger the better. If you can grow the smaller varieties or by smaller plants, you may find them to be tastier and more tender. Large Pak-choi has the tendency woody and lacking in flavour.
Tender young Pak-choi only requires a very brief cooking time, with the leaves taking even less time to cook than the stems. Some cooks will separate the leaves from the stem, adding the leaves at the very end of cooking so the leaves only slightly wilt before cooking, the stems can be cooked a little bit longer, though may people prefer the stems to be crunchy rather than softened. Pak-choi can be used in Stir-fries, soups, curries, spring rolls salads and numerous other dishes.
Growing: This is a fast-maturing, versatile and tasty crop to grow in your vegetable patch or containers on your porch. Pak-choi, like many other Asian vegetables are a cool season crop, preferring moist conditions and the ideal temperature range or 15 to 20 degrees Celsius, light frosts are tolerated by most varieties, generally the ideal time to plant is in the spring and autumn.