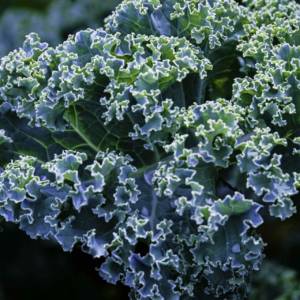 Dwarf Blue Curled Kale: In the past few years, the word “kale” has become synonymous with health, and not without good reason. This nutrient-packed member of the cabbage family is rich in vitamins and minerals and tastes good to boot! As if that weren’t enough to make you want to fill your garden with this tasty plant, most types of kale are also relatively easy to grow thanks to their ability to withstand cooler temperatures. Like many other hearty greens, the leaves’ flavor will actually improve if exposed to cooler temperatures, so light frosts are your friend instead of foe. There are many different varieties of kale, but almost all types are either purple or green in color with broad or curly leaves.

Dwarf Blue Curled Kale, as its name suggests, the heirloom Dwarf Blue Curled variety is one of the curly leaf types of kale, with a beautiful green-blue hue that makes it a popular addition to many autumn gardens. This variety is considered to be particularly hardy and can be harvested in all climate zones until the ground freezes. Considering that it grows in a more compact fashion than other types of kale, it’s a great crop for space-challenged gardens.

Dwarf Blue Curled Kale can be planted either in the spring just prior to the last frost or in the autumn, leaving approximately 6 to 8 weeks before the first average frost for the plants to grow.  Although plants will be richer in flavor when they are allowed to grow in cooler weather, they are tolerant of most climates.

Light
NATURAL: Full sun. Will tolerate partial shade but with the trade-off of a lower yield.

ARTIFICIAL: Although starts or seeds will sprout under most types of indoor lighting, kale responds particularly well to LED and fluorescent lamps as they produce less heat than other sources.

Growing Media
SOIL: Prefers a loamy, fertile soil with good drainage. A pH of a 5.5 to 7.0 will keep plants healthy and nourished, but a pH of 5.5 to 6.8 is ideal. If your soil has large amounts of clay or sand, try mixing in a soilless potting mix.

SOILLESS: Unlike other leafy greens, kale does not require a ton of nitrogen, so most standard potting mixes will suffice for getting your greens to grow.

HYDORPONICS: Does particularly well in hydroponic systems such as NFT or rock wool and can usually be harvested within a month after starting.

AEROPONICS: Will thrive in aeroponic systems.

WATER: Requires moderate to high levels of water. Aim for 2 to 3 waterings per week but do not allow soil to get soggy as kale is susceptible to root rot.

NUTRIENTS: Unlike other leafy greens, kale is not particularly greedy for nitrogen, so applying a balanced fertilizer or organic compost when first planting outdoors and once or twice throughout the growing season should suffice.

FOLIAR: Is particularly fond of fish emulsion and liquid seaweed foliar. Apply every 3 to 4 weeks for optimal growth.

PRUNING: Although not required, if you are not consistently harvesting your kale, remove older leaves near the bottom of the plant to encourage new growth from the center of the plant.

MULCHING: Apply a layer of organic mulch such as straw or wood chips in the late fall to help plants overwinter. Mulch can also be applied in the warmer months to help regulate temperature, but be aware that in heavy rainfall, mulch can trap the water and cause the plants roots to become soggy.